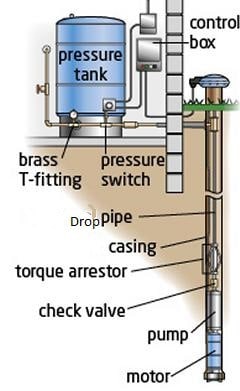 How Water Wells Work and Where Your Water Comes From

Despite the fact that 15% of Washington state residents receive their water from private water wells, but even more get their water from a public water systems fed by water wells.  Very few people actually know how water wells function. Even though most people will never work on their own well, it is still advantageous to know how it works and how important it is to do preventive maintenance and repairs.

What Is An Aquifer Anyway?

To begin you must understand what an aquifer is. An aquifer is a layer of materials underground typically something like sand and gravel or fractured rock layers that water flows through. The water filters through the ground until it reaches the layer where it can’t pass any deeper then travels through that layer to the lowest point ending in lakes, oceans, etc. These aquifers also act as filters as the water passes through them. 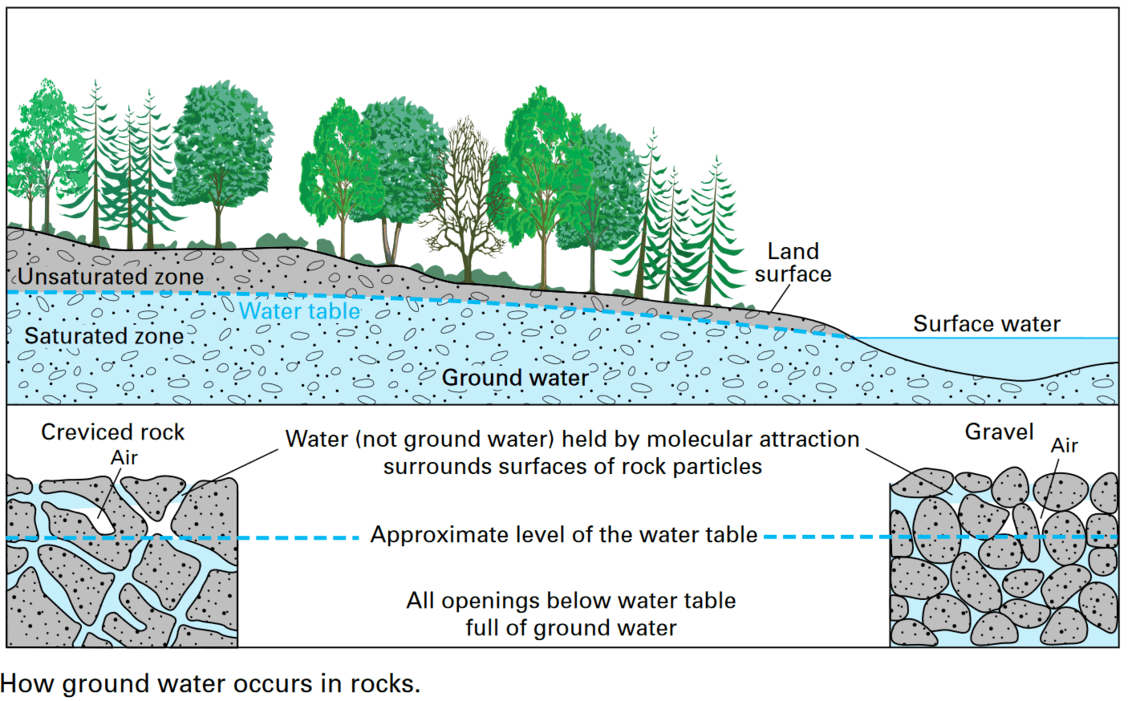 Ground water occurs in rocks, gravel, and sand deposits – in formations with pores that allow for water to move through the material.

The hydrogeologic cycle is what keeps our aquifers replenished.  The cycle of water passing from rain clouds, to the ground, then out into the ocean, and back as rain has been going on for millions of years.  Western Washington is particularly blessed with plentiful rainfall and many small aquifers throughout the area are often very reliable because of this. 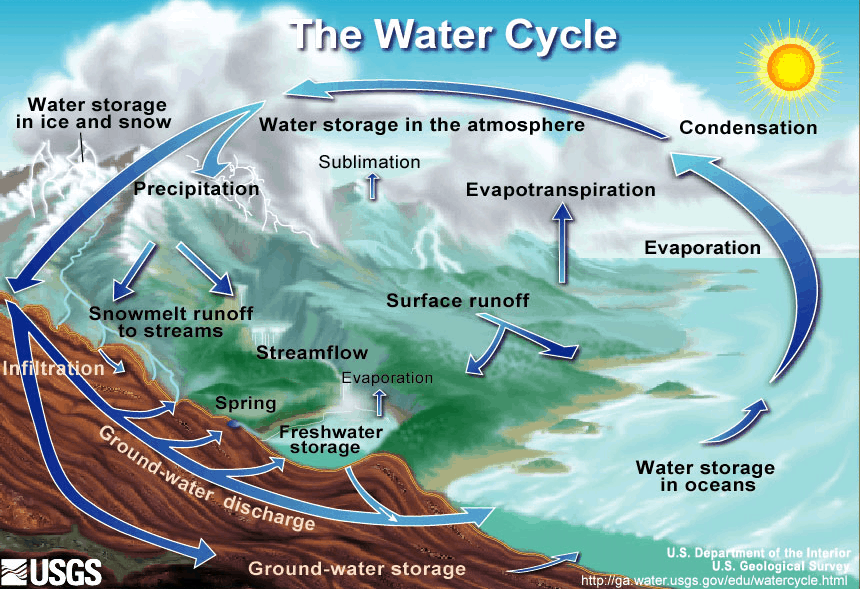 The water cycle depicts movement of water to different areas around the earth. The hydrologic cycle as depicted by the USGS.

How Water Wells Are Constructed

A Washington residential well is typically made up of 6 inch steel or PVC pipes known as casing that are drilled down into the  aquifer in order to tap into that clean water running through it. Because the water inside the aquifer is moving, there is pressure behind it and some of the water inside the aquifer will force its way up into the casing. Typically it won’t have enough pressure to come all the way out of the casing but sometimes it does and these are called Flowing Artesian Wells. At the end of the casing is a slightly smaller screen that keeps any larger materials from the aquifer out of the well casing. 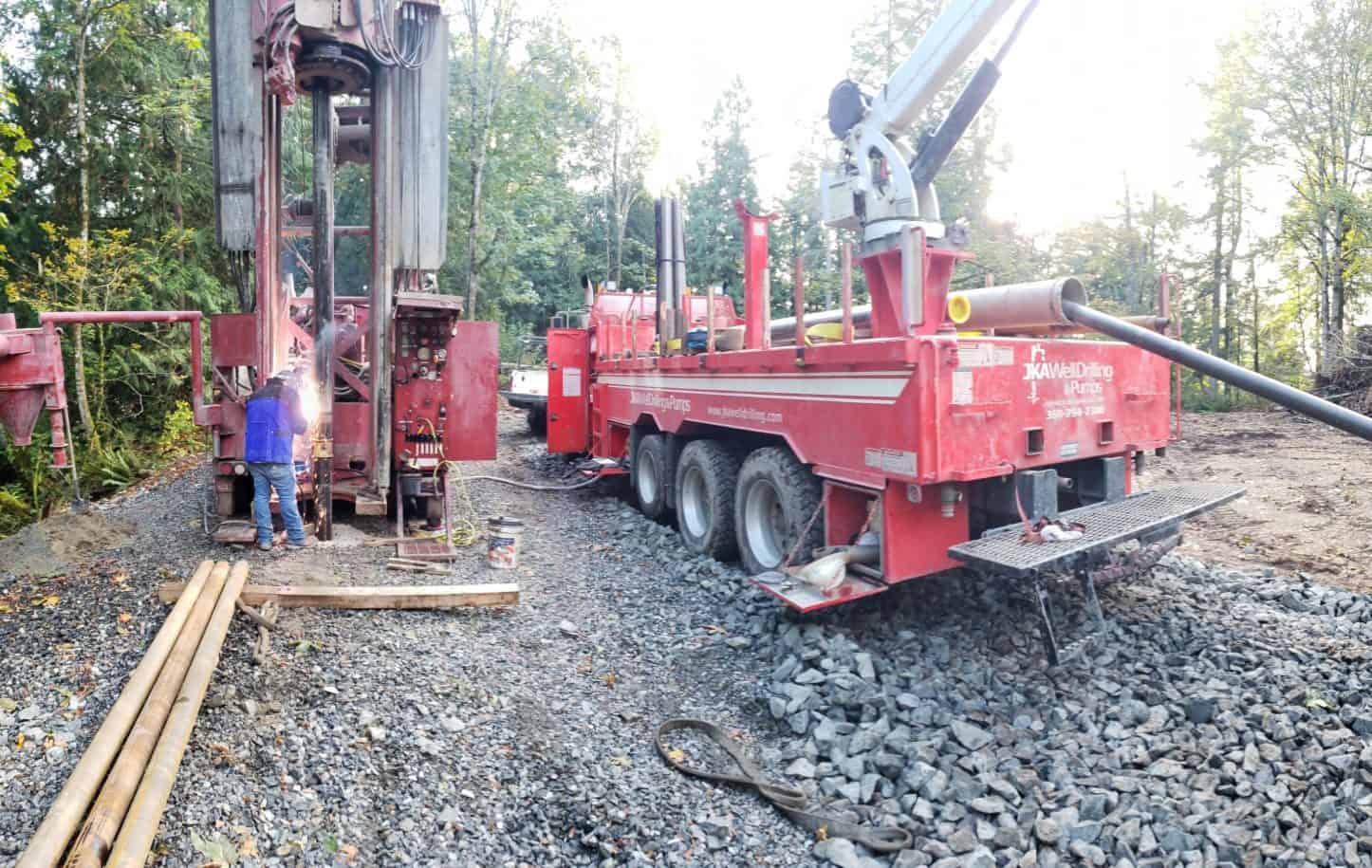 Now that we have the well we need to have a way to get the water out of it. This is where your pump comes in. The type of pumps that are most commonly used today are called submersible pumps. These pumps are placed at the end of the pipe underneath the water with wires running down alongside the pipes from the control box to the pump. When the pump is turned on it pumps the water up through the pipe and into the pressure tank and then the house.

What’s In The Well House? 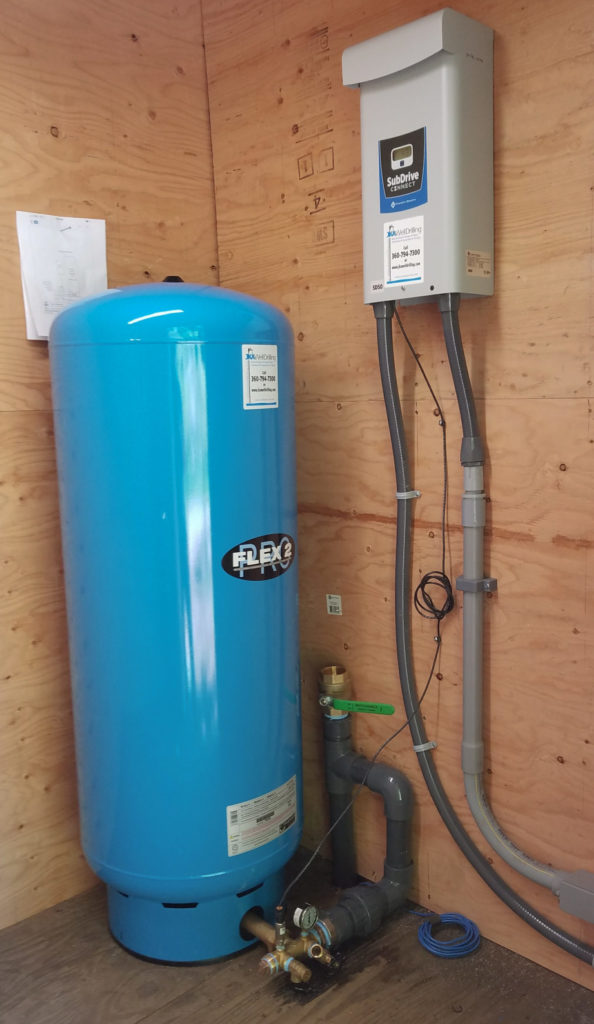 The pressure tank serves multiple functions. Its first function is as a buffer for the pump. This means that every time you turn your water on it doesn’t have to turn the pump on. This is important because the hardest thing on a pump is starting. The less you start the longer it will last. It does this by storing a volume of water under a certain pressure and maintaining that pressure for longer than your pipes can. As part of this it acts as water storage. A 81 gallon tank will store about 21 gallons of water.  On the pressure tank is a pressure switch which informs the pump when to start and stop. The way it decides this is based on the current pressure in your system. Each pressure switch has a high pressure setting and a low pressure setting. The high setting tells the pump to shut off and the low settings tells it when to start. Without a pressure switch your pump would continuously run which can cause pipe damage or pump overheating.

The final component in a basic system is the control box. The control box is used to start the pump by providing a surge of electricity to help the pump start. It is also used to tie extra sensors into the pump wires.

Some newer pump systems have Variable Frequency Drives, or VFD’s.   These pumps act as On Demand style well water systems and often can have a smaller tank on the surface.

If the well only produces a little bit of water, or the peak demands of the users of the well need more water than the well can pump in a given period of time, then a storage tank & booster pump system is often used.  A storage tank is an atmospheric tank, which means it’s not under pressure.  The well pump pumps water into the storage tank, which stores the water until a booster pump pulls it out to deliver it to the home, farm, or other water use.

Well your system may not look exactly like this these are the most common  type of systems installed in homes today. If nothing else that should give you a general idea of how you get your water.

Interested in learning more about your well water system?   Check out the Washington State Department of Health’s site on water systems, or the National Ground Water Associations consumer website, wellowner.org.

What is a Water Softener? Water softeners are technically called Water Conditioners and are used to make filtered water readily available for use.   Water softeners are designed to remove hardness from water. Water hardness, a measure of calcium and magnesium in the...
Read More

Once water is discovered, it becomes drillers job to determine where the best place in the aquifer is to get the water. There's no such thing as an underground 'lake' in unconsolidated materials (sands, gravels, clay, etc) – all the aquifers are made up of sand &...
Read More