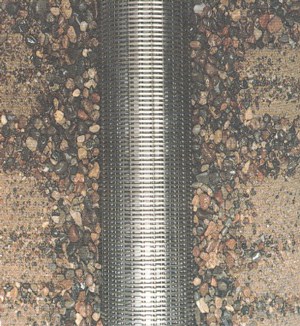 Once water is discovered, it becomes drillers job to determine where the best place in the aquifer is to get the water. There’s no such thing as an underground ‘lake’ in unconsolidated materials (sands, gravels, clay, etc) – all the aquifers are made up of sand & gravel formations with water in them, and gravel works better than sand as a transmissive medium (meaning that the water moves through gravel faster & better than sand).

In these situations, drillers using casing hammer drilling technology will telescope a screen down the inside diameter of the well – most often by pulling the bit out of the well and dropping the screen down the inside of the well. Following placement, the driller will put the drill string back in the well to hold the screen on the bottom, then pull back the casing to expose the screen to the aquifer. Once the screen has been exposed, the driller will use the air compressor on the rig, or a bailer, to ‘develop’ the screen. Development is the process of surging a fluid through the screen to force the fine particulates in the formation to come through the screen and into the well, where it can then be removed from the well prior to placing the well into operation. This technique, known as a “naturally developed” screening process uses the formations own material to create a filter pack around the screen. The picture on this page is of a naturally developed well screen, photo courtesy of Johnson Screens.

Screens are sized by ‘slot’ size, equal to one thousandth of an inch (0.001 inches), which is the distance between each V-shaped wire wrapped horizontally around the screens skeleton. Typically, residential wells have anywhere from 12 to 35 slot screens installed (though we use 25 to 35 slot screens 95% of the time). The ‘old’ technique for sizing well screens was to allow for 60% of the formation to actually go through the screen. Once the screen was in place, it was developed until the sand no longer showed up in the surged water.

Notice in the above picture (probably of a 40 slot screen) how their well screen has gravel packed around it, but the formation is mostly sand as you look further away from the screen – this is because during the development time, the sand was surged out of the formation.

Slot size means almost as much as putting a screen in in the first place. If we size the screen too small, the well doesn’t make as much water as it could, if we size it too big, it will take FOREVER to develop the fine particles out of the well. But, we have found that in most areas, a fine balance can be established with 20 to 35 slot sand screens (2 to 3 times larger slot sizes than our competitors typically run).

Additionally, by sizing, installing, and developing screens this way, the wells ‘intake’ from the formation is effectively moved out to the outer radius of the developed portion of the formation – which means that the surface area from which the well is collecting water is much greater, resulting in reduced intake velocities and increased yield.

As time has passed, drilling companies have moved towards using smaller and smaller screens – mainly because it results in much less development time, thereby costing them less money – we’ve steadfastly refused to decrease screen sizes to increase profits. For the best well you can buy, call JKA Well Drilling today!

How Water Wells Work and Where Your Water Comes From Despite the fact that 15% of Washington state residents receive their water from private water wells, but even more get their water from a public water systems fed by water wells.  Very few people actually know how...
Read More

What is a Water Softener? Water softeners are technically called Water Conditioners and are used to make filtered water readily available for use.   Water softeners are designed to remove hardness from water. Water hardness, a measure of calcium and magnesium in the...
Read More